Although Apple didn't focus on Apple Music during its WWDC keynote yesterday, there are a few changes coming to the app in iOS 16.

The changes to ‌Apple Music‌ start on the new ‌iOS 16‌ Lock Screen, where the ‌Apple Music‌ Now Playing widget is now located at the bottom of the display. This falls in line with ‌iOS 16‌'s new focus on de-cluttering the Lock Screen and pushing all notifications to the bottom portion of the screen, where you can choose to hide them throughout the day if you get too many. 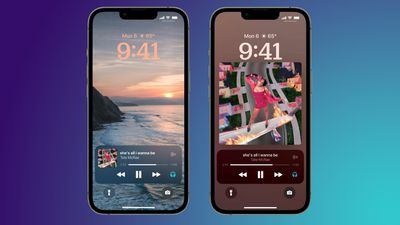 For ‌Apple Music‌, the Lock Screen player has all of the expected controls for playback and connecting AirPods or other headphones. You can also expand the controls to a full screen view, which will enlarge the album artwork of the currently playing song and become your new iPhone Lock Screen image.

You can now add artists to your "Favorite Artists" list by navigating to their artist profile on ‌Apple Music‌ and tapping a new star button at the top of the page. After doing this, Apple says that you'll get better recommendations and notifications about new releases from that artist.

‌Apple Music‌ originally had a similar feature where you could follow artists, and you'd receive updates about their music and sometimes updates about upcoming releases. The new Favorite Artists feature seems more streamlined and focused on improving push notifications and recommendations surrounding your favorite artists.

‌Apple Music‌ in ‌iOS 16‌ lets you sort playlists by a few different orders: regular Playlist Order, Title, Artist, Album, or Release Date. Furthermore, you can choose ascending or descending order for each of these categories.

This is a notable addition given that ‌Apple Music‌ doesn't have any automatic sorting options. Any time you add a new song into a playlist, it's dropped to the bottom of the list, with the oldest songs remaining at the top. If you want to sort it, you have to manually drag it to where you want it to go.

With the new feature, you can choose to reverse the traditional Playlist Order so that new songs appear at the top. These sorting features are found in the ellipsis menu in the top right corner of the playlist screen on ‌iOS 16‌.

Lastly are a few very slight UI changes that can be found within the full screen player in the ‌Apple Music‌ app. Apple has subtly updated the UI to feature slightly thicker playback and volume bars, among other small tweaks.

We've been recapping all of the latest news from WWDC, including iOS 16 tidbits and improvements coming to tvOS 16. For a full recap, check out our video that breaks down everything Apple announced during its WWDC 2022 keynote in 13 minutes.

nortonandreev
The bare minimum… The Music team has been lazy.
Score: 25 Votes (Like | Disagree)

Wilson1313
Whole Music UI is a mess. No back button, convoluted menus, unreliable saving, too many clicks... need an entire rethink.
Score: 12 Votes (Like | Disagree)

HacKage
Favourite artists for recommendations is welcomed, but the ability to block certain artists from being included in playlists would massively appreciated!

This feature works very well with Spotify, and is one of the main things keeping me there. Even if an artist I don't want to hear from appears on Discover Weekly or similar, it just skips that song without me knowing. The only sign that the artist was on a playlist is the greyed out song in the list.
Score: 9 Votes (Like | Disagree)

211
Still too much space wasted to have to hide other options like Shuffle, Repeat, Like/Dislike.
Score: 8 Votes (Like | Disagree)

Tired of hearing the same 12 tracks over and over again in a playlist of over 300
Score: 8 Votes (Like | Disagree) 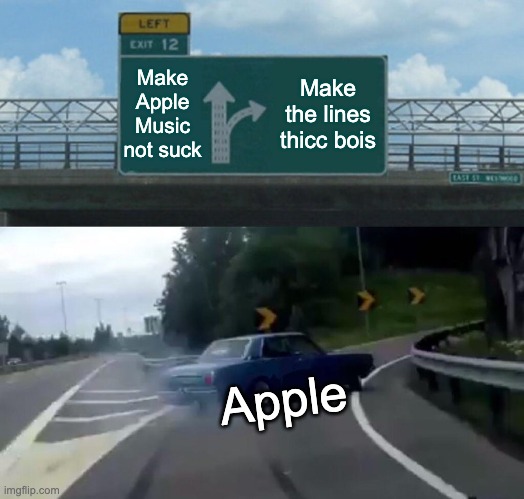 Monday July 11, 2022 11:07 am PDT by Juli Clover
Apple today seeded revised third betas of iOS 16 and iPadOS 16 to developers, along with the first iOS and iPadOS 16 public betas. Both of these updates add a new Lock Screen feature - a full-screen music player. Since iOS 10, the music player on the Lock Screen has been available as a smaller card-style player that only takes up a small portion of the screen with a miniature version of the...
Read Full Article • 73 comments

Thursday August 5, 2021 10:45 am PDT by Juli Clover
Apple today announced a new Apple Music for Artists feature called Shareable Milestones, which is designed to allow Apple Music artists to share key milestones and successes with their fans on social media. The Apple Music for Artists feature generates automatic milestones for artists of all sizes, which artists can highlight on social media networks. Milestones include new highs and...
Read Full Article • 14 comments

Tuesday June 7, 2022 2:10 am PDT by Sami Fathi
With iOS 16, Apple is bringing the full-screen music player back to the Lock Screen, offering an entirely new view that puts album art in the center with controls at the bottom. The full-screen music player on the lock screen was last available with iOS 10 and is now back with iOS 16 as part of a lock screen redesign. On iOS 16, users will be able to change the Lock Screen font and colors,...
Read Full Article • 35 comments

Monday June 6, 2022 4:57 pm PDT by Juli Clover
iOS 16 introduces some major changes, including a total overhaul for the iOS Lock Screen. The Lock Screen looks different, it's more customizable, and it can do more than ever before, so we thought we'd do a quick hands-on video to give MacRumors readers a first glimpse at the revamped Lock screen. Subscribe to the MacRumors YouTube channel for more videos. The Lock Screen can be customized...
Read Full Article • 96 comments

Monday June 6, 2022 10:55 am PDT by Tim Hardwick
As part of its iOS 16 presentation at WWDC today, Apple unveiled an all-new Lock Screen for iPhones that provides users with a wealth of customization options, including the ability to add widgets. In iOS 16, you can now edit and switch between different styles for your Lock Screen, with the option of applying filters to photos. With a new multilayered effect, the subjects of photos are set...
Read Full Article • 52 comments

Tuesday February 15, 2022 4:43 am PST by Mitchel Broussard
Apple today started sharing its "Replay 2022" playlist to Apple Music subscribers. Just like the past few years, this playlist ranks all of the music you've been streaming since the year began, with 100 total tracks in the ranking. "Replay 2022" will update every week with the newest order of your most-listened-to tracks. By the time 2022 ends, the playlist provides an overall look at your...
Read Full Article • 41 comments

Tuesday May 17, 2022 7:50 am PDT by Joe Rossignol
Apple today announced that it will begin livestreaming select concerts through Apple Music, starting with a Harry Styles performance this Friday at UBS Arena in New York. Apple Music subscribers will be able to watch free of charge around the world. The concert series is named "Apple Music Live" and is reminiscent of the "iTunes Festival" (later rebranded as the "Apple Music Festival"), a...
Read Full Article • 47 comments

Tuesday March 22, 2022 9:25 am PDT by Juli Clover
Shazam, Apple's music discovery app and service, today gained a new suite of concert features that are designed to make it easier for users to locate and explore upcoming live music shows. When Shazaming a song, searching for it in the Shazam app, or looking for it on the Shazam website, users will now see concert information and details on tickets available for upcoming shows located...
Read Full Article • 10 comments