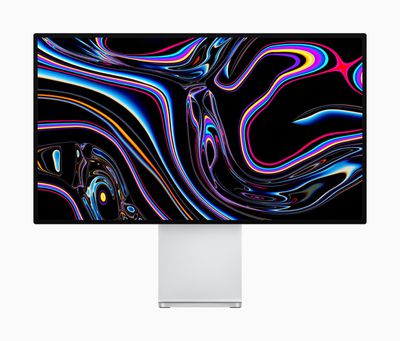 Called the Pro Display XDR, the new LCD monitor features a 6,016 x 3,384 resolution display and 20 million pixels. It uses a direct backlighting system with a large array of LEDs, able to produce 1,000 nits of full-screen brightness and 1,600 nits of peak brightness.

It's more than 40 percent bigger than Apple's iMac 5K display, and offers users P3 wide color, 10-bit, and several reference modes. The new screen has a 1,000,000:1 contrast ratio and can maintain 1,000 nits of full-screen brightness indefinitely.

The Pro display also features Thunderbolt 3, which enables two monitors to run off a single power source, and up to four displays to be connected together for more screen real estate.

Priced from $4,999, the new monitors feature an anti-reflective coating, and a matte option is also available. The Pro Stand, which is sold separately for $999, provides both tilt and height adjustment, allowing Pro Display XDR to rotate into portrait mode. A VESA Mount Adapter will also be available for $199.

The new monitor and optional extras will be available to order from this fall.

BradWI
$999 for the stand. The groan from the audience was hilarious.
Score: 154 Votes (Like | Disagree)

smaffei
It might be cheaper to hire an intern to hold your pro display!
Score: 91 Votes (Like | Disagree)

Caliber26
The fact that a $5,000 display doesn't come with the stand is beyond absurd. Not that it was ever within my reach, at that price point, but damn.
Score: 59 Votes (Like | Disagree)

MathersMahmood
They were doing so well. Then 999 for that stand. :mad:
Score: 57 Votes (Like | Disagree)

sundog925
Oh man, did you hear the audible discord when they announced the Mac Pro stand would cost 999$?! What were they thinking!? They made it seem like it was a whole unit, not separate buys, GREED! lol
Score: 56 Votes (Like | Disagree)
Read All Comments