Apple Reveals 'macOS High Sierra' With APFS, Metal 2, and Refinements to Safari and Other Apps

Apple has announced the newest software update for its Mac computers, which it's calling "macOS High Sierra." At the WWDC keynote this afternoon, Craig Federighi said that High Sierra brings along improvements and refinements across the system and builds off what the company created in macOS Sierra last year.

macOS High Sierra will deliver new video and graphics technologies that will lay the groundwork for even more improvements to macOS down the line, according to Apple. The big additions in High Sierra include Apple File System (APFS), support for High-Efficiency Video Coding (HEVC), and an all-new version of Metal -- simply called Metal 2 -- which will allow Apple's advanced graphics tech to power even more Mac apps, including machine learning and VR-based content. 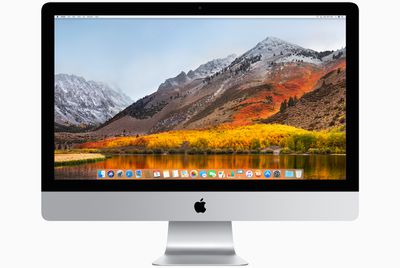 As it has on iOS, APFS will grant macOS devices enhanced performance, security, and reliability thanks to its advanced architecture that's been optimized for modern users' high storage needs. Apple said that APFS makes day-to-day operations such as copying files "instantaneous," as well as helping to protect user data from power outages and crashes, and keeps files secure with native encryption. High Sierra will maintain read-and-write compatibility with previously formatted HFS drives, and Apple said that the integration of APFS into macOS has been designed to accomodate for any potential future advancements in storage technology.

With support for HEVC (H.265), High Sierra devices will be able to enable video streaming and playback of 4K video files at high quality, while dwindling the size by 40 percent in comparison to the current H.264 standard. Apple said that the new HEVC update will allow for "high-quality video streaming" on networks where only basic HD streaming was previously possible. High Sierra will work in tandem with today's refreshes of the iMac and MacBook lines to deliver fast and power-efficient HEVC encoding and editing.

Metal 2 will bring a refined API and improved performance to Apple's graphics technology, allowing developers to accelerate development of their apps in a number of ways. The technology introduces support for machine learning used in speech recognition, natural language processing powers, and computer vision capabilities. With Metal 2 and the new Mac hardware line-up, High Sierra will be able to support VR content creation for the first time on Mac.

During the keynote, Apple announced a couple of big name game studios are putting their support behind VR on Mac, including Valve and Epic.

Drawing on the performance of Metal 2 and the latest Mac hardware, macOS High Sierra adds support for VR content creation for the first time, enabling developers to create immersive gaming, 3D and VR content on the Mac. Leading VR companies are joining Apple to drive VR innovation on the Mac with features coming later this year — Valve is optimizing their SteamVR platform for macOS and enabling connection of the HTC Vive headset, while Unity and Epic are bringing their VR development tools to macOS. Also later this year, Final Cut Pro X will add support for professional 360-degree workflows with the ability to import, edit and export 360-degree video.

Apple also promised that many of its most popular apps will be updated with refinements in High Sierra, including major new additions within Photos. A new always-on sidebar will give users a glimpse at their albums and a few organization tools, while a redesigned Edit view includes new toolsets. Live Photos can also be turned into GIFs that repeat now, and Memories will be curated around new topics, including some for pets.

In High Sierra, Photos will support external editors, so other apps like Photoshop and Pixelmator can be launched directly within Apple's Photos app, and any edits made will be saved back to the user's Photos library. Additionally, support for third-party project extensions like Animoto, Shutterfly, ifolor, WhiteWall, and Wix, will give users the ability to print and publish their favorite pictures directly within Photos.

- Safari can automatically use Reader to open articles in a clean, uncluttered format, while Autoplay Blocking stops media with audio from automatically playing in the browser.
- Intelligent Tracking Prevention in Safari uses machine learning to identify and remove the tracking data that advertisers employ to follow users’ web activity.
- Mail search gets faster and easier with Top Hits, which puts the most relevant results at the top of a user’s message list.
- Siri on the Mac responds with a natural and more expressive voice, and when using Apple Music, it learns music preferences, creates custom playlists and answers music trivia.
- Notes adds simple tables, where a user can type in cells, make edits and move rows and columns.
- Spotlight provides flight status information, including departure and arrival times, delays, gates, terminals and even a map of the flight path.
- iCloud File Sharing lets users share any file stored in iCloud Drive and collaborate with other people.

Speak for yourself, I consider eGPU support to be monumental.
Score: 13 Votes (Like | Disagree)

647156
Looking forward to using APFS from High Sierra on my G3, seems the compatibility is already there from the last update :)

RezSeeker
I'm glad they're working on refining existing software rather than spending time on reinventing parts of the wheel. I'll be happy to have an even more bulletproof and faster OS over the next year and a half.
Score: 10 Votes (Like | Disagree)

I thought Macs were going to be given more attention now? Guess not.

I'm sure the forum will be pleased to hear that one of my main gripes is now resolved and I will shut up about it!